The impatient and strong willed ranger that lives in the northlands.

Arian Saeth has long, gold-ish blonde hair. She has curious big green eyes, her right having a star shaped scar stretching out from it. She’s also short and wears simple leather armor and gloves. Her weapons of choice are a fire short spear and a masterwork heavy bow.

Arian Saeth was born in Xanathos, in a highly populated and poor farmer’s town. A few years after she was born her parents died of a strange but deadly disease spread throughout her homelands. So she was forced to live with her only known living relative, her cruel uncle Giroth. He was the owner of a shady circus called The Shiver Moon Players. Unwilling to live and work for him and his creepy troupe, she left quietly with a lion cub in tow.

Later, after working and traveling her way across the ocean to the Empire, she settled into a city along a riverbank. She hoped to find a teacher that could help further her fighting skills and help her find work. Arian was mentored under a well known ranger, Nasr. After around 5 years of training she started taking on higher ranked quests from nearby royalty, slowly making a name for herself in the adventuring business with her lion partner, Hodari.

She now lives on a small piece of property outside of town. Arian has a few chickens and a small garden. Arian doesn’t belong to any specific guild or organization but believes in many nature gods and spirits. Her property is scattered with small shrines and statues.

Arian is an experienced traveler, exploring often while doing quests. Arian has never been to the islands though. Recently, while traveling with a party of other mercenaries, she was hit under the eye with a piece of shrapnel from an exploding cannon. She was left with an unusual star shaped scar. Now she has continued on with the same group traveling along the coast line, with the eventual destination of the Druid Lands. 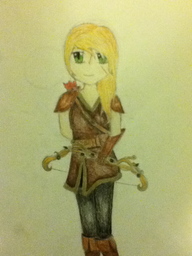