A rather pretty girl with pale skin, black hair, and purple eyes. She wears her hair over her left eye because it is just an empty socket. She was born with blonde hair, but thanks to her necromantic shenanigans it turned black.

Andromeda grew up in Ankhyra where she lived with her family in the rich part of town. She lived with her mother Seline, her brother Aleyk, and her father Mortimer. Because of her family’s necromantic background, none of the city children would have anything to do with her and her only real friend was her brother. Tragically, her brother mysteriously vanished on her 8th birthday and was never heard from again. Soon after this, her family moved to the regency for her dad’s work in the weapons trade. He was currently selling weapons infused with necromantic powers to a tribe of Druids known as the Black Dragon Tribe.

The Black Dragons were fighting in the Great Druid War and Mortimer decided he wanted some of the action. He went to the sight of the war and ended up killing one of the Druid leaders. This frenzy of death made him intoxicated with the power and when he came back home he started performing rituals to give him demonic strength and basically make him the strongest Necromancer ever.

A clan of Paladins under the goddess Ceridwen caught whiff of these dark power shenanigans and banished Mortimer to the dark realms forever. In doing this, Andromeda caught sight of the void and a dark spirit piggybacked a ride inhabiting her body. This earned Andromeda the tile “The Black Rose.”

A few months after, Seline committed suicide and Andromeda fell in with a traveling circus as their resident channel. she ended up in Shardeej where she was captured by cultists following the dark Klash’tuu and was rescued by the rest of the company. She recently gave her left eye in payment for a special dagger and a pact with Nagrasagiel-The Judge. 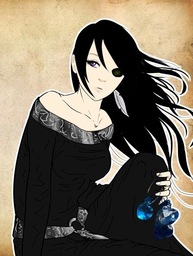